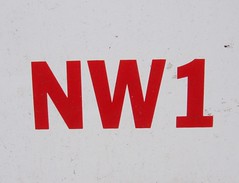 Large postal district of North-West and Central London covering Camden Town, parts of Chalk Farm and Primrose Hill, as well as taking in the entirety of Regent's Park. In addition, NW1 takes in Somers Town (see Euston), stretching south to Euston Station and St Pancras Station (but not King's Cross), as well as some of the area around Marylebone Station in the south-west. It is shared between the London Borough of Camden and the City of Westminster.

Automatically-generated list of things in NW1 (view them on a map):