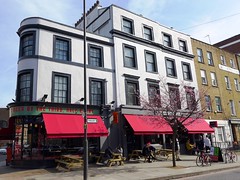 It's a large space, with plenty of room for tables despite the huge square wood-panelled bar in the centre. Varnished boards are underfoot, giving way to geometric tile designs around the bar. Old gig posters and yellowing newspaper clippings are displayed behind clear plastic on the walls. Seating is mainly a mix of freestanding wooden chairs, banquettes, and booths, with just a few high stools around the bar and in one corner.

Kake visited on a Tuesday afternoon in September 2019. '80s and early '90s rock was playing, not too loud — in fact, probably about as quietly as is appropriate for this style of music.

There were two real ales on: Siren Yu Lu (£2.30/half) and Dark Revolution Luminous; they also had Seacider Raspberry Ripple. The Yu Lu was totally flat, but served pleasantly cool, not over-chilled. Ales seem to be served in handled glasses by default, but I managed to request a straight glass in time (and ended up with a stemmed one).

Chilli-salt squid (£6) photo was OK, though would have been better if they'd taken the membrane off before cooking it. The batter was light but quite floury-tasting, and a lot of it fell off. The accompanying chilli mayo was rather too sweet, but had a pleasing level of chilli heat.

Accessibility: A step to get in. Accessible toilet on the level with (rather wobbly) grab bars, alarm cord, and low sink and hand dryer, though the door is a heavy sliding one that isn't too easy to open. Other toilets are down steps in the basement.