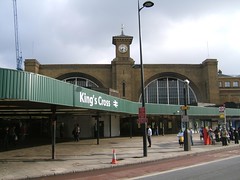 Zone 1 rail station, serving the major rail lines to the north of England and Scotland.

From the station are stairs leading to the tube station underneath the building. St Pancras International Station lies across Pancras Road to the west in a separate building.

A new entry concourse was opened in March 2012 with a new pub, The Parcel Yard, as well as new shops and restaurants; see writeup by London Reconnections. Exit from the station continues via the old building.