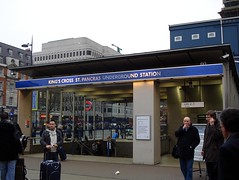 Zone 1 Tube station on the Victoria, Northern (Bank branch), Piccadilly, Circle, Metropolitan, and Hammersmith & City lines. It lies underneath the buildings for the mainline stations of St Pancras (services to Europe, as well as the Midlands and Thameslink services) and King's Cross (services to the north of England and Scotland).

For those thinking of changing between the Victoria and Northern lines here, note that it's almost always better to do this at Euston instead, even if this involves a little doubling back (i.e. if coming from the north end of the Victoria line and changing to go south on the Bank branch of the Northern line), since the Euston interchange is cross-platform whereas the King's Cross one involves struggling through crowds along passages.

Note that the surface structures are in both NW1 (St Pancras) and N1 (King's Cross) postal districts.