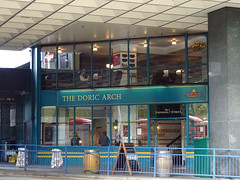 Good Beer Guide pub just outside Euston Station. This is the pub that used to be the Head of Steam. It was bought by Fuller's a while back and then renamed. All that really changed was that the outside changed colour and the full range of Fuller's beers became available along with a number of guest beers.

Decoration is still vintage railway memorabilia and signage (NB: the pub was redecorated in May 2014, this may no longer be the case - we've yet to check). There's a seating area up some stairs, overlooking the Euston bus station, as well as a little booth to the side of the bar. As you'd expect, it gets very busy after work, though there's a fairly constant stream of people in and out, so if no tables are free, you can usually get one relatively quickly by lurking nearby.

There are nine handpumps. Beers available in March 2008 on tap were London Pride (£2.65/pint), Discovery (£2.65/pint), Chiswick (£2.35/pint) and several guests, including Summer Lightning from Hopback (£2.90/pint, very tasty). In September, there were five Fuller's ales (the above plus ESB and HSB), and four guests (Timothy Taylor's Landlord, Hop Back Summer Lightning, Struggling Monkey, and York's Centurion's Ghost, the last at £2.80/pint). All the beer was well-kept, as befits a pub which really makes an effort with its real ales. On a Friday visit in July 2009, though, most of them were off, with only Discovery available at one point (until they mercifully restored the Pride).

Serves relatively standard pub grub. There are about 12 mains, with two vegetarian options (nachos at £5.95 and lasagne at £6.95) and all prices in between these two. Chips are £2.20. Food is served noon-3pm and 4-8:30pm Monday to Friday, and noon-5pm Saturday and Sunday.