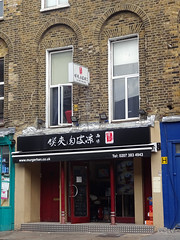 The decor is fairly basic, with utilitarian tiles on the floor and plain walls enlivened mainly by advertising posters. Wooden chairs and tables seat around 35-40 people.

Kake and Sarah visited on a Thursday lunchtime in October 2016. There were a few other customers in when we arrived around 12:30pm, but enough room to fit us in. Music was playing, a little louder than ideal for conversation.

We started with a couple of pork murgers ("Chinese hamburger"; 腊汁肉夹馍; £3.50 each) photo. The bread was doughy in a good way, with a crisp exterior. Despite being described on the menu as "braised in special herbal sauce", the meat was fairly plainly cooked, and seemed to have been braised with nothing but salt for seasoning; it was also the only thing inside the bread, with no fresh coriander or spring onions to liven it up. It was quite fatty too (the menu has another option for non-fatty pork), though this worked well in context.

Sarah's biang biang noodles in spicy sauce (油潑biángbiáng面; £8.20) photo were nicely chewy, but the sauce was a little too salty.

Kake's dumplings in spicy and sour soup (酸汤饺子; £7) photo were pretty tasty. The soup was nicely vinegary yet still balanced, and bolstered with generous quantities of nori. The dumplings themselves, stuffed with pork, were structurally sound and sufficiently juicy.

Tap water arrived swiftly on request, served in half-pint handled beer mugs (as was the green tea). Service was generally fine, except that they tried to refuse a Scottish note when we paid.

Accessibility: A huge step to get in. Toilets are down a flight of stairs with a sturdy handrail on one side and a narrow space at the bottom.