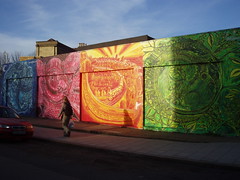 An area of South-East London in the London Borough of Lewisham, within the SE4 postal district.

It's served by Brockley Station and Crofton Park Station, both of which currently have National Rail service only. However, Brockley Station will join the East London Line when extension works are complete (see the ELL page for more info).

Brockley as it exists now was largely built during the Victorian period, when terraced houses began to be built around what is now Brockley Cross (near the station) in the 1840s. Prior to this, the area comprised a small village with outlying farmland. Development further intensified when the station at Brockley was opened in 1871 (Crofton Park opened in 1892).

The central thoroughfare for the area is Brockley Road, which runs from Brockley Cross south to Honor Oak Park, and is built up with the chicken shops, takeaways, discount stores and greasy spoons familiar to other South London arteries. More and more evident, however, are signs of regeneration as new cafes and delicatessens open up. There is also a conservation area near Hilly Fields to the east of Brockley Road. The generally attractive property available, and its affordability compared to other South London areas developed during the Victorian era which are a similar distance from the centre (such as Herne Hill, Dulwich, and Blackheath), have cemented its popularity amongst young professionals.

Green spaces are to be found around the edges of Brockley, with the most substantial being Hilly Fields to the east, and Telegraph Hill Park to the north. Just outside SE4 are Blythe Hill Fields (in Honor Oak Park) and Ladywell Fields. There are, additionally, a number of cemeteries breaking up this part of South-East London (Camberwell New Cemetery to the south, Brockley and Ladywell Cemeteries to the east, and Nunhead Cemetery to the west).

Auto-generated list of things in Brockley (view them on a map):