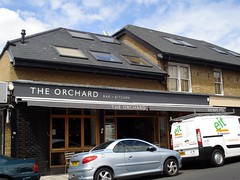 Bar and restaurant in Brockley, fairly near the station. It opened in December 2009 on the site previously occupied by Aquarium and before that by Chez Ecosium.

Inside, it's divided into two distinct parts, separated by a wall of books with an aquarium embedded in the middle of it. The front part is well-lit, with large windows at the front, exposed brickwork, a hardwood floor, a sofa corner, individual and communal wooden tables, and a standard lamp by the door. This area also houses the bar, open kitchen, and a solitary flatscreen. The back area is dimmer and cosier, with more sofas as well as tables.

Kake visited on a Thursday late lunchtime in June 2011. Although I'd read rumours (see links below) of cask ale, there didn't appear to be any handpumps on the bar, though they did have fonts offering Freedom Organic Lager (which is vegan) and Meantime London Pale Ale, as well as Aspalls Suffolk Cyder (£1.75/half). There were a few other people in, including some parents with babies. The flatscreen was switched off but a Beatles CD was playing, not too loud.

According to the Orchard website as of August 2011, food is served 11:30pm-4pm and 6pm-10pm every day (except stopping at 9pm on Sundays), while as of September 2012 it adds that breakfast is now available 9:30am-11:30am Tue-Sun. The menu example from June 2011 has vegetarian and vegan options clearly marked.

In June 2011, Kake's warm roast vegetable and lentil salad (£8.50) photo was vegan, and very good. It was a pretty large portion, and complete in itself with no need for bread or any other carbohydrate on the side. All the vegetables (butternut squash, red/yellow/green peppers, green and yellow courgettes, baby onions) were cooked just right, neither too hard nor too soggy. The lentil component was also well-judged, a mixture of brown lentils and split peas. Watercress on top added extra bite, and the advertised tomato dressing was drizzled over in just the right proportion to add a bit of a tang without dominating the dish.

Free wifi is available, with username and password chalked on a pillar by the bar.

Accessibility: No step to get in, just a small ridge. Short but fairly steep ramp to get to the back room and toilets. The toilets are either unisex or have signage too subtle for me to understand, but in any case one of the two cubicles is an extra-wide accessible one with grab bars.