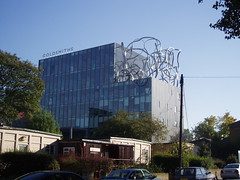 An area mostly covered by the SE14 postcode, and largely focused around its two stations, New Cross Gate (to the west) and New Cross (to the east), along the same stretch of New Cross Road.

It is home to Goldsmith's College (part of the University of London), which focuses largely on humanities subjects (notably fashion design, as well as music production). The student population gives the area a youthful vibrancy (and has led to it being claimed as a 'home' to a number of bands on the mid-00s indie music scene), though it has also been resistant to gentrification.

A notable enclave within New Cross is Telegraph Hill, a predominantly middle-class area of Victorian terraces stretching up the hill to the south of New Cross Gate Station. It also contains one of the key areas of green space in the locale, [Telegraph Hill Park]?, though there's also [Fordham Park]? (just to the north between the two stations).

Auto-generated list of things in New Cross (view them on a map):