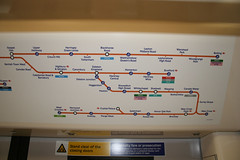 Previously a Tube line running from Shoreditch Station in the north to New Cross Station and New Cross Gate Station in the south, the East London Line was redeveloped and extended during 2008-2010 and now forms part of London Overground.

A restricted preview service between Dalston Junction and New Cross/New Cross Gate started up on 27 April 2010, and the full service on the New Cross Gate branch (through to West Croydon) started on 23 May 2010. This first phase of redevelopment was completed in February 2011, when the service began running beyond Dalston Junction to Highbury & Islington. The second phase of redevelopment was completed in December 2012 with the opening of a branch from Surrey Quays to Clapham Junction.

Auto-generated list of all East London Line stations on this guide (view them on a map):