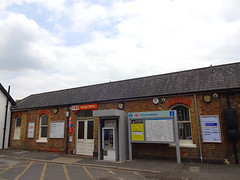 It's on the East London Line, and there are also about two mainline trains per hour northbound to London Bridge and another two southbound to Sutton, with early-morning and late-evening extensions to Charing Cross and East Croydon.

Penge East Station, with trains to Victoria, is just a short walk away.