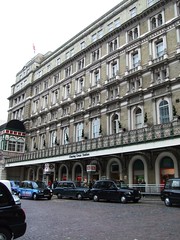 Zone 1 Tube and rail station on the Bakerloo and Northern lines.

The main station building stands on the Strand, while entrances to the tube station can be found on the east side of Trafalgar Square photo as well as on either side of the Strand itself.

It is a very short walk along Villiers Street from Embankment Station, which is on the same two lines but also on the District and Circle lines.

Also a terminus of the Hayes Line and the South Eastern Main Line (though some trains on both routes go to/from Cannon Street instead).