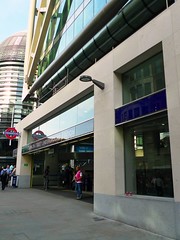 Zone 1 Tube and rail station on the District and Circle lines. Also a terminus of the Hayes Line and the South Eastern Main Line (though some trains on both routes go to/from Charing Cross instead).

The rail station has a separate entrance directly on Cannon Street photo, while the Tube station entrance is around the corner on the western side of the station, on Dowgate Hill.