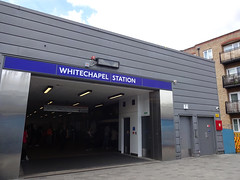 Note: As of January 2016 the main entrance on Whitechapel Road photo has been closed, and a new temporary entrance has been opened on Court Street (pictured).