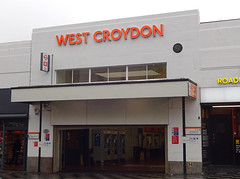 Zone 5 rail station in South London, with trains to Victoria and London Bridge (both departing from platform 3). It's also a terminus of the London Overground East London Line (platform 1, except on Sundays when it arrives on platform 4 and departs from platform 3).

Around the back of the station, on Station Road, there's a tram stop (served by all four Tramlink routes) and a bus station.

The main entrance is on London Road, and there are two secondary entrances, one step-free to platforms 1 and 3 (accessed via the car park to the north of the main entrance) and the other step-free to platform 4 (on Station Road). The Station Road entrance opened in mid-2012 to provide step-free access to platform 4 and to give better onward transfer to trams and buses. Note that platform 4 has trains towards Sutton, Epsom, and Epsom Downs; for trains towards central London, the London Road entrances are more convenient.

The walk to East Croydon Station is just over a kilometre (around two-thirds of a mile). Alternatively, it's two stops on any of the Tramlink routes (the reverse journey, East Croydon to West Croydon, is slightly longer by tram due to one-way running in the centre).

As of July 2017 there's a book swap shelf accessed via platform 1 photo.