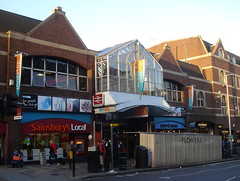 Major rail station in South London. Travelcard zone 2. Services to Waterloo, Victoria, and East Croydon. Also the southern terminus for West London Line trains, and one of the termini of the East London Line.

The consequence of this huge amount of traffic is that the station is the main place for changing trains and is very crowded at commuting times. Platforms 5, 6, 10 and 12 in the morning, and platforms 11, 13 and 15 in the evening get especially congested. --Rowley Birkin QC, November 2007.

The main entrance, on St John's Hill at the south end of the station, is home to a small shopping centre which lies just outside the ticket barrier. There's a small Sainsbury's, an M&S Simply Food, a Costa Coffee, a Caffe Nero, a West Cornwall Pasty Company stall, a small WH Smith's, and a small newspaper/magazine outlet. As of January 2008, there are plans to redevelop this part of the station.

Toilets (20p coin needed) are in the main walkway under the platforms (i.e. inside the ticket barrier). Many other coffee places and small shops are dotted around the station.

On the Kingston Loop Line.