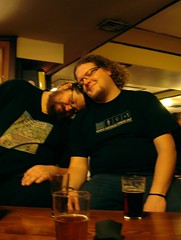 In November 2007 we did a pub crawl along the East London Line, since it was closing for upgrades at the end of the year, and wouldn't be open again until 2010. We did have to take a few liberties with pub locations, but every station was used, in order, for either departure or arrival (or both).