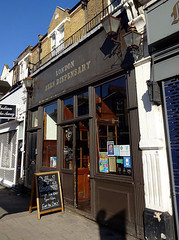 There are two rooms. The front room can seat about 25 people and contains the "bar" (not an actual bar, just an area where the beer is and the staff will serve you). The floor here is bare boards, echoing the half-panelled walls. A small lobby entrance at the front has been retained, perhaps in an attempt to minimise traffic noise from the busy road outside — a handwritten notice just inside requests patrons to close the door behind them. Two small tables are tucked against the front window, one on each side of the lobby, with larger tables in the rest of the room.

Down a couple of steps from here is a corridor with a drinking shelf and tall stools, leading past the toilets to a back room with more seating, and finally out to a small courtyard-style beer garden.

Kake visited on a Thursday early evening in September 2018. There were four or five other customers in when I arrived around 4:30pm, and several more turned up while I was there. Music was playing, on the goth side, not too loud. The five handpumps were clipped for Salopian Sirocco, Southey Best (£1.85/half), Southey Pale, Bedlam Benchmark (£1.85/half), and one cider: Sandford Orchards Devon Mist.

Accessibility: A step to get in. Two more steps (with no handrail) to the toilets, back room, and beer garden.