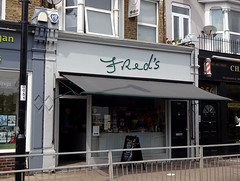 It does tea, coffee, pastries, cakes, and smallish meals (breakfasty things on toast, salads, sandwiches). Payment is by card only (though the tip jar is cash).

Inside are about 15 two-person tables (can be joined if needed) with metal chairs. The walls are a combination of exposed brickwork and scuffed paintwork in a mixture of greys. Colourful pictures hang on the walls. There's a paved back garden with picnic bench tables.

When Rowley Birkin QC visited on two weekday mornings in February 2019, it was fairly busy, with people coming and going for various periods of time. No music was playing. The situation was similar when Kake visited on a Monday morning in May 2019, though there was always at least one free table.

Rowley Birkin QC reports: "I had poached eggs (£6) on toasted sourdough, and they were fine. However, something odd: when I ordered, I was directed to a particular table by a staff member. After finishing the food, I noticed there were egg fragments on the floor beneath my table, one or two tablespoons’ worth. I assumed I must have unwittingly dropped some of my poached eggs onto the floor, so when the staff member came through again I pointed it out, apologising for the mess. However, the staff member then said "oh no, it wasn’t you, it was already there." Now, this was the same staff member each time, so why had he told me to sit at a table where the floor was covered in food detritus? Other tables had been available. Anyway, I assume this was an aberration because the place looked clean and tidy otherwise."

(There seems to be some inconsistency in how staff prefer to organise things, since when Kake visited in May 2019 the staff member at the till insisted on me giving them a table number with my order, rather than sending me to a table of their choice.)

In May 2019, Kake's flatbread with smoked salmon and cream cheese (£6) photo was presented like a sandwich, but so floppy it was impossible to pick up without bits falling out. Even when eating it with a knife and fork, the cream cheese was so slippery due to melting in the toasting process that I had to take the top piece of bread off to have any hope of cutting through it without the fillings shooting out (the bluntness of the knife didn't help). There was plenty of salmon; hot-smoked, and fairly salty but not overly so. I liked the inclusion of sliced pickles, but overall it felt not quite properly thought through.

Earl Grey tea (£2.50) was loose leaf, served in a sort of cafetiere with no way to separate the leaves, so by the time I'd drunk enough from my cup to make room for a top-up, the remaining tea was already overbrewed and bitter. Again, like the flatbread, it seemed as though someone had made a decision without thinking through the consequences.

Laptop-friendliness: There were a few people working on laptops during all our visits (Kake was one of them). Good WiFi (password is on sugar containers etc.; 20-40 Mbps down). A sign in the toilet urges laptop users to allow others to share their table.

Accessibility: A step to get in (10-15 cm?), but no further steps to interior seating and toilet once you're in. Three steps to the back garden. The toilet is fairly spacious (possibly could accommodate a wheelchair).