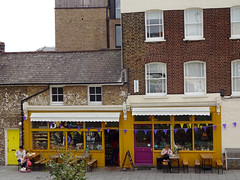 Cafe and coffee shop in Brockley, just across the road from Brockley Station. It also sells the bread, vegetables, and groceries that were previously sold from its now-closed sister business, the Broca Food Market on the other side of the railway tracks.

The Broca originally opened in May 2007 in just a single shopfront photo; it now spreads over two, though it's still quite a small place. The left-hand side houses the service counter and a few seats around a low coffee table.

The right-hand side is crammed with an eclectic mix of seating including upright chairs, low bar stools, a church pew, a sofa, an armchair, and even a wheely office chair. A large mirror at the back reflects light from the large front windows photo, and a small corner nook offers extra privacy photo. A high shelf offers a "bring one, take one" book exchange photo.

Kake visited on a Friday lunchtime in July 2014. When I arrived a little before 12:30pm there were no other customers, but half an hour later there were 7 or 8 other people in, and only one spare table left. Music was playing; some rather perky jazz which later gave way to Simon & Garfunkel.

The menu appeared to consist mainly of sandwiches, though there was also a soup marked up on a blackboard. The sandwiches were all named after films; I chose the Bright Lights, Beef City (£4.90 for eat-in) photo which included pastrami, gherkin, lettuce, and emmental. Bread options were white sourdough or granary, and I was also offered the option of having my sandwich toasted. Tap water came in a Stella cidre glass — it was a hot day and I'd asked for as large a glass of water as possible!

The bread was cut thickly and the sandwich made taller by liberal quantities of filling, but it wasn't overly hard to eat despite this. The lettuce and gherkins were nicely crunchy, there was just the right amount of mustard, and everything was in proportion.

Service was friendly and helpful. They didn't bring me a napkin with my sandwich, though; I'm not sure if this was an oversight or a deliberate policy. It could have been deliberate for environmental reasons (there was also a proper hand towel in the toilet rather than a pile of paper towels).

Kake's verdict: I'd come back for another sandwich if I was in the area.