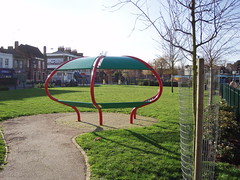 An area of South-East London in the London Borough of Southwark. It blends into Peckham to the north, Brockley to the east, Honor Oak to the south, and East Dulwich to the west.

Nunhead is served by Nunhead Station and only two buses (the P12 and 78) along Nunhead Lane, though there are plenty of services which run along Peckham Rye and around the back of Nunhead Cemetery (the 343 and 484). This relative lack of transport links ensures that Nunhead remains more affordable than nearby locales, though it has some attractive Victorian terraces, a far lower crime rate than nearby Peckham and one of the outstanding cemeteries of the Victorian era (Nunhead Cemetery). Indeed, like its neighbours, most of the area was developed during the late-19th Century, although a portion (the Tappesfield Estate, north of Nunhead Cemetery) was rebuilt in the 1970s.

The origins of the name Nunhead can only be guessed at, though there is little historical support for the dramatic tale which is inscribed outside The Old Nun's Head, a recently-restored public house on Nunhead Green. This green is the focal point for Nunhead community, with excellent butcher's, fishmonger's and baker's shops of long standing. There are also a number of flower shops (due to the proximity of the cemetery), as well as the usual newsagents, takeaways and discount stores.

The extent of Nunhead is not precisely delineated. To the north of Nunhead Green, the area blends into East Peckham (an area stretching to New Cross, which was once known as Hatcham). On the south side of Nunhead Cemetery are further Victorian terraces merging into East Dulwich, Honor Oak, and Brockley.

Auto-generated list of things in Nunhead (view them on a map):