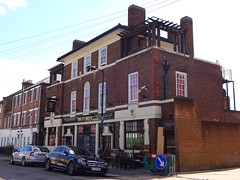 Community-owned pub just off the edge of Peckham Rye Common, in the southern reaches of Nunhead.

It was previously owned by Enterprise Inns (see older version of this page for a description as of 2011), but was closed and sold for development in 2012. It received a Grade II listed building status from English Heritage shortly before closure, and was later listed as an asset of community value. It reopened on 25 August 2013 as a community-owned co-operatively run business.

Entry is into a small space with seating for around 25 people on a mixture of banquettes, low stools, and upright chairs, plus four more on tall stools at the curved bar in the corner. Wooden panelling announces the names of all the old Trumans beers, and an old notice listing "public bar prices" in shillings and pence hangs next to the bar. Everything is wood — floor, walls, tables, chairs, and bar.

Through a set of double doors is a larger room with more seating and a stage area under a proscenium arch and gold lamé curtains; old posters here hark back to the pub's past as the Newlands Tavern, an important part of the 1970s pub rock scene. Yet another room is accessed from here, with a skylight, a wood fire, and some unusual rectangular wooden booth-like seating. Finally, out the back there's a part-covered courtyard-style beer garden with picnic benches.

Kake visited on a Thursday lunchtime in September 2018. Arriving at their opening time of noon, I was the only customer, though one other did turn up while I was there. No music was playing.

Four of the eight handpumps (half in the front bar, half on the back) were clipped, for Brick Brewery Peckham Pale, Brockley Brewery Summer XPA, Truman's Swift, and Dark Star Hophead. A pint of lime and soda was £1.10.

According to the Ivy House website as of September 2018, food is served noon-3pm and 5pm-9pm Mon-Thu, noon-3pm and 5pm-10pm Fri, noon-10pm Sat, and noon-8pm Sun. Around half of the menu is vegan photo of menu.

In September 2018, Kake tried the pulled pork in brioche with chips (£11) photo. The pulled pork was a huge portion, and I left at least a third of it on the side of the plate. It was perhaps a little dry in places, but it wasn't too sweet, and a subtle hint of chilli made it more interesting. The brioche bun was fine, and remained structurally stable throughout despite becoming soaked in the pork juices. The chips were chunky, skin-on, and really tasted of potato, though they could perhaps have done with a little longer in the fryer.

They have free WiFi, with the network name and password written on a blackboard above the bar. According to the Ivy House website as of September 2018, there's a quiz every Wednesday at 8pm.

Child-friendliness: According to the Ivy House website as of September 2018, "well-supervised children" are welcome until 8pm. They have a small children's menu which includes vegan options. There's a pull-down nappy change in the ladies' toilet (gents' not checked).

Accessibility: A large step to get in. Once you're in, the bar, seating, toilets, and garden are all on the same level.