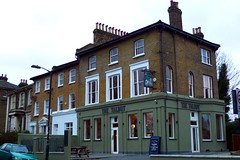 Note: The Talbot was sold to a new owner in mid-2014; we haven't visited since this change of management, so some of the below may be out of date.

This small pub consists of a single room wrapped around the bar, with a couple of booths at the back on one side. The floor is bare boards and the walls are pale cream. Wines are written up on a board on the wall; at least 16 choices of each of white and red on Kake's September 2011 visit. There are picnic benches on a large outdoor patio to the side of the pub.

Kake visited on a Thursday late afternoon in September 2011. There were only a few people in, but the place is small enough that it still felt quite lively, especially as one of the people was a cheerful (but well-behaved) child. '80s music (David Bowie, The Cure, Adam Ant, Erasure) was playing, fairly quietly. When Kake, Bec, Ewan, et al. visited again on a sunny Sunday afternoon in May 2014, there were several people sitting outside but still free seats inside.

Four real ales were available on our September 2011 visit: Deuchars IPA, Harveys Sussex Best, Spitfire, and Brains Best. They also had various things on tap including Leffe, Hoegaarden, and Addlestones Cloudy cider. A pint of lime and soda was 90p. In May 2014, they had a mild on, among other things.

Food is served at least some lunchtimes and evenings (Tuesday evening food started at 7pm on our September 2011 visit). In May 2014, chips came skin on, and were nice and chunky, though the salt provided to go with them was rather inconveniently in the form of flakes in a small dish.

According to a notice seen in September 2011, quiz night is every Tuesday at 8pm.

Child-friendliness: They have at least one high chair. There have been young children present on both our visits so far. No obvious baby change facilities, though there is a horizontal tiled space in the ladies' toilets that's just big enough to change a baby on (though perhaps not a bigger toddler).

Accessibility: Step-free to get in, though this necessitates a tight turn just in front of the door. Step-free to bar, seating area, and toilets once you're in. There was a door which might have had an accessible toilet behind it, but I didn't get a chance to check.