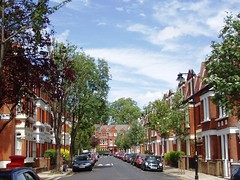 An area of North London, lying almost entirely within the London Borough of Islington. It tends to be mostly within the N5 postal district, though many of those in Lower Holloway (N7) would refer to themselves as Highbury.

Apart from Highbury & Islington Station, it is also served by Canonbury Station, though Canonbury is generally considered to be south of St Paul's Road.

It is known largely for its association with Arsenal Football Club, who for most of the twentieth century had a playing ground opposite Arsenal Station (Highbury, now being redeveloped as flats), which was then rebuilt closer to Drayton Park Station and is known as the Emirates Stadium.

Auto-generated list of things in Highbury (view them on a map):