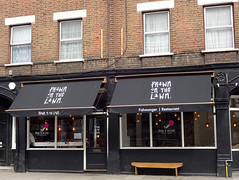 Fish and seafood restaurant in Highbury, with a fishmonger's attached.

It's a small space, though larger than their previous premises just down the road. The fishmonger's counter is on one side, and there's seating for just 22 people on the other, along with half a dozen seats at the counter separating off the open kitchen at the back. The decor is simple, with exposed brickwork, a worn wooden floor, and slabby wooden tables covered with brown paper stamped with the restaurant's name.

Kake visited on a Tuesday lunchtime in September 2017. I was the first customer, arriving just after their opening time of noon; one other turned up around 12:30, and by the time I left there were another couple too. Music was playing, not too loud but a bit repetitively dancey.

The menu changes from day to day photo on the day of my visit, but always includes small plates as well as a few larger mains and a list of fish from the fishmonger's counter, priced by the kilogram, that can be cooked to your liking. I was recommended to order two or three small plates, and I added a side of spiced crushed potatoes as well.

First to arrive was a crab, Cornish seaweed, mooli, and cucumber salad with a sesame dressing (£9) photo. This would have been good even without the crab, with a light, well-balanced dressing that complemented rather than overwhelmed the crisp, juicy vegetables. Shiso leaves on top added extra interest.

Scallops with soy, ginger, sesame oil, and peanuts (£9) photo were large and sweet, with the corals still on, and competently cooked. I did feel the dressing was a little underwhelming, but this is a minor point.

Hake fillet with brown shrimp and samphire (£8.50) photo was again cooked very competently, with a crisp skin and well-judged flesh. Unfortunately the samphire was quite woody, and I ended up stripping the tender bits with my teeth instead of just being able to eat the whole thing.

Spiced crushed potatoes (£3.50) photo were beautifully crispy and not at all greasy. I found the salt level a little too much in combination with the saltiness of the other dishes; they would have been fine on their own. I mentioned this to the staff when they asked how everything had been, and they not only took the comment gracefully, they took the dish off the bill (without me asking).

Service was helpful and efficient. Tap water arrived in a chilled bottle which was left on the table. No service charge was added to the bill.

Kake's verdict: Despite the small criticisms above, overall I liked this place a lot, and I'm hoping to come back soon.