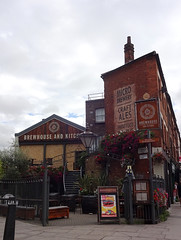 Pub and microbrewery in Highbury.

It's a strangely situated building, squeezed in on a street corner between St Paul's Road and the railway tracks running up to Highbury & Islington. Entry is via the beer patio out the front, where tall stools cluster around tables made from barrels.

Inside, the style is industrial, with exposed brickwork, a partly stone-flagged floor, stylised "bare bulb" lighting suspended from Meccano-style gantries, and room dividers built from reclaimed planks and bits of piping. Ceiling fans rotate overhead, randomly interspersed with old slatted window shutters. Right at the back are the copper tanks where beer is brewed on-site.

Kake visited on a Tuesday morning in September 2017. I was the only customer when I arrived around 11:30am. Soul music was playing, not too loud.

There were seven of their own ales on handpump, including the relatively low-alcohol Tramshed session bitter (£1.90/half). This was a little past its best, but not bad enough to take back.

According to their website as of August 2017, "well behaved" children and dogs are welcome, and food is served noon-10pm Mon-Sat and noon-9pm Sun.

Accessibility: Technically there's step-free access via a ramp, but it's a very narrow one with a sharp bend at the bottom, and on our visit one of the entrance doors was propped open in the way, making it even harder to use. Once you're in, it's level to the seating, bar, and RADAR-locked accessible toilet (other toilets involve at least two steps), but there are pillars and things in the way making access quite narrow.