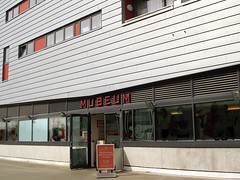 Museum attached to the Emirates Stadium in Highbury, focusing on the history of Arsenal Football Club. As of April 2010, admission is £6.

The museum is divided into two halves; one focusing on Arsenal's most famous managers and players, and the other covering noteworthy victories achieved by the club.

The displays are a mixture of storyboards, interactive games photo, quizzes, narrations accessed via telephone handsets, videos playing on flatscreens, and actual physical items. Included in the latter category are a club rulebook dating from the end of the 19th century photo, a 1927 Daily Express-sponsored songsheet designed to ensure nobody got the words of "John Brown's Body" wrong, and a set of football kit from 1936 (displayed for maximum contrast next to its modern lightweight counterpart) photo.

The interactivity of the displays allows the visitor to find out more about aspects of particular interest (e.g. Arsenal strips through the ages) without being overwhelmed by a barrage of details.

Arsenal's most famous manager, Herbert Chapman, is referenced throughout the museum for his playstyle innovations, among other things. A similarly iconic recurring theme (and one which raised some amusement among our party) is Charlie George's atypically-oriented celebration of a match-winning goal; not only is it mentioned several times in passing, but it's also immortalised in a full-sized plaster model photo.

Although it would be easy to dismiss the Arsenal Museum as being purely for fans, there's enough side commentary here to provide diversion to even those with no interest in football (though Kake's visit was made greatly more enjoyable by being in the company of a knowledgeable friend who was able to relate lots of interesting stories sparked off by the exhibits we viewed).

On Kake's April 2010 visit, the staff on duty were friendly and helpful, and we didn't encounter the ticket-buying problem reported by diamond geezer (linked below).

Accessibility: Access from street level on Drayton Park requires going up some stairs, across a bridge over the railway lines, and then down a flight of stairs after entering the museum. The Emirates Stadium access page says the museum is wheelchair-accessible, but we haven't confirmed this.