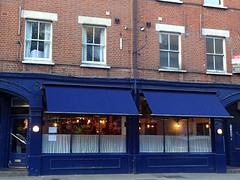 Italian-influenced restaurant in Highbury, just along the road from Highbury and Islington Station.

It's split over two floors. The ground floor is light and bright, seating around 35 in twos and fours. Down in the basement is another room, dimmer and cosier, with three even dimmer banquette-lined booths for those who don't feel the need to see what they're eating.

Kake and bob visited on a Monday evening in October 2018. We'd booked in advance, since we knew it was likely to be busy. There were already people seated when we arrived slightly before their special "Arsenal playing at home" opening time of 5:30pm, and by the time we left a little over an hour later it was entirely full. Music was playing throughout our visit, perhaps a little intrusively.

Burrata with bottarga (£10) was nicely refreshing and had just the right amount of saltiness. It did seem a slightly large portion for an antipasto. Venison carpaccio (£9.50) was soft and flavourful. The fresh horseradish grated over the top wasn't as strong or harsh as we'd expected, and made a very good addition to the dish.

Tagliarini with crab, chilli, and lemon (£12) was very good. The pasta was neither too hard nor too soft, and it was just the right type to hold the crab and sauce. There wasn't a huge amount of crab, but this worked well in context, and the crab was well-handled, with not a single piece of shell. Pappardelle with beef shin ragu (£9) included beautifully soft and silky pasta, and the beef shin had plenty of flavour.

Grilled mackerel (£16) was cooked on the rare side, which worked really well. The accompanying puy lentils were slightly undercooked to our taste, but this is a personal preference rather than a mistake on the part of the kitchen. bob was told their lamb (£24) would be cooked medium by default, and asked for it medium rare instead — this turned out to be a good idea. The accompanying beans were again slightly undercooked for our taste.

Service was very friendly and helpful, and they weren't at all disconcerted by being informed of bob's lactose intolerance. Tap water was provided on request, in a carafe that was replenished when we ran out. A 12.5% service charge was added to the bill.

Kake's verdict: The tagliarini changed the way I think about pasta — previously I'd always thought I didn't really like it. I'd definitely like to come back here and eat more pasta.

Accessibility: A large step and then two smaller steps to get in. Some of the ground floor seating is up a step. About half of the seating is in the basement, down a flight of stairs with a bend in the middle and a non-continuous handrail on one side. The only toilets we saw were in the basement; three cubicles, two of which are very small, though the middle one (marked with a unisex symbol) is larger and has a pull-down baby change.