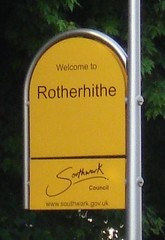 A peninsular area of South-East London lying within the London Borough of Southwark, in the SE16 postal district.

Its southern part, around Surrey Quays Station and the Surrey Quays Shopping Centre, may be referred to as Surrey Quays. It also has a slight overlap with Bermondsey to the west; some people think [Southwark Park]? is in Bermondsey, others think it's in Rotherhithe, and this uncertainty extends to the council estates along the northern part of Southwark Park Road.

Auto-generated list of places in Rotherhithe (view them on a map):