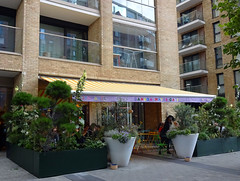 It's at the base of a modern new-build, but the decor is retro, with brightly coloured chairs and tables on a part-covered patio outside, and mismatched tables and chairs inside ranging from 60s-inspired white plastic to dark varnished wood. Fresh carnations sit in rustic pottery jugs on the tables. There's a bar in the corner, with a Peroni tap and pastries laid out; behind this is an open kitchen.

Kake and Toby visited on a Saturday lunchtime in August 2017. It was quite full when we arrived around 1:30pm, but there were still a couple of free tables inside even after everyone retreated inside out of the rain. Music was playing, so quietly that we couldn't even tell what it was.

Eggs florentine (£8.50) photo weren't bad. The muffin was a decent size and had a well-developed flavour. There was plenty of spinach, and it was cooked competently, but underseasoned. The eggs were fine. The hollandaise was fine in itself, but there wasn't really enough of it to balance the large size of the muffin and the underseasoning of the spinach.

A pot of darjeeling tea (£2.60) was well-presented; loose-leaf, with a warmed cup, and a little saucer provided to put the tealeaf container in when it had finished brewing (something a lot of cafes forget about). Service in general was a little slow, but friendly, and glasses of tap water were brought to the table without us having to ask. A 10% service charge was auto-added to the bill.

Kake's verdict: It's a little on the expensive side, but I'd come back if I was in the area and not on a budget.

Child-friendliness: The staff were friendly and welcoming to Toby, who is 5, and they were happy to leave out the ingredients he didn't want in his sandwich. There doesn't appear to be a children's menu.

Dog-friendliness: According to their menu as of August 2017, the cafe "loves well behaved dogs", and on our visit several bowls of water were already set out for them in the outside seating area.

Accessibility: No steps in, and none to the toilets either (including an accessible one), but the tables are quite close together.