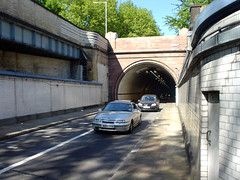 A road tunnel running underneath the Thames to link Limehouse in the north with Rotherhithe in the south. (Note that although Shadwell lies directly to the north of the tunnel's Rotherhithe entrance, the tunnel bends to the east as it crosses the river and so its other entrance is actually in Limehouse.)

Although it's technically possible to walk through the tunnel, this is not going to be a pleasant experience; pollution levels are high, and the tunnel is narrow and winding. Cyclists are permitted; but, again, are not going to enjoy it much.

Large vehicles are not allowed to enter the tunnel, and TfL seem to consider it infeasible to run buses through it. There have, historically, been bus routes running through the tunnel, see for example this 2003 article on the incredibly cute buses of the no-longer-extant route 395.