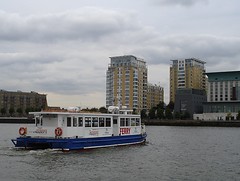 A Thames Clippers ferry service running between [Canary Wharf Pier]? on the Isle of Dogs and [Nelson Dock Pier]? on the Rotherhithe peninsula.

According to the Wikipedia article linked below, it's also known as the Canary Wharf to Rotherhithe Ferry, and the Hilton Docklands to Canary Wharf Shuttle. "Hilton Ferry" seems simpler.

As of April 2008, services run roughly every ten minutes at peak commuting times (roughly 8am-9am and 5pm-7pm Mon-Fri) and every twenty minutes at other times. The first ferry of the day leaves around 6:30am Mon-Fri and around 9am Sat-Sun, and the last leaves around 11pm-midnight. The full timetable used to be available as a PDF on the Thames Clippers website, but as of August 2008 it has vanished.