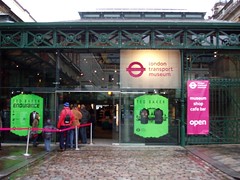 Museum covering the history and future of transport in London, located in Covent Garden. It reopened in November 2007 after two years of refurbishment.

Admission fees as of January 2010 are £10 for adults, £8 for senior citizens (including Freedom Card holders), £6 for students, and free for under-16s (though part of the admission price is a "voluntary donation" which you can avoid if you want to by asking at the front desk). If you plan to make multiple visits it might be worth becoming a Friend of the museum, which as of January 2010 is £20/year and gets you free entry to the Transport Museum plus 10% off in the shop and also concessionary rates at the Brunel Museum, the Museum of London Docklands, and special exhibitions at the [Museum of London]?.

Kake and friends visited less than a month after reopening (December 2007), and not all the exhibits were working yet. Some of us found the layout a bit confusing; it wasn't always clear how to move around the museum if we wanted to see the exhibits in chronological order. They had a kind of numbered punch-card system which helped a bit (but not much) to make sure we'd not missed any exhibits. We hadn't bought the guidebook (£5, I think), and perhaps should have.

The trail starts on the top floor, with horse-drawn vehicles and river transport, then continues down to motorised buses, taxis, and trains. Throughout the museum there are large-scale reconstructed or refurbished vehicles, some of which you can go inside. There are also some recordings (by actors) describing life as, for example, a crossing-sweeper, a horse bus driver, or a conductor. Right at the end is some rather marketing-like stuff about the future of transport in London.

The museum includes a library with over 12,000 items; entry to the library is by appointment only, and you will need to bring formal ID with you (e.g. passport), though admission is free. A post on uk.transport.london says there's a "little reading library" somewhere in the main museum too, but we managed to miss it.

Apparently the cafe is rather expensive; one price quoted on uk.transport.london was £2.50 for a cup of coffee. Apparently the cocktails are good, though! There's a theatre downstairs too - the Cubic Theatre.

You can visit the shop and the cafe without paying to get in to the museum itself; the interesting part of the shop is the book section, which is upstairs, and worth a look. The posters are upstairs too.

The museum has some other holdings which are not on display at this site; they can be seen at the London Transport Museum Depot in Acton during open weekends; these don't tend to happen very often, usually around twice a year (check the website for details).

Ewan comments: On a visit in March 2008, we also got confused at times by the signage, though it didn't greatly hamper our understanding of the exhibits. The small reading library was on the first floor in the education area. One of the exhibits (the tunnel-digging) had an actual actor explaining the work involved.