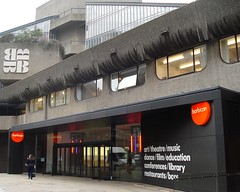 An arts centre added in the 1970s to the Barbican post-war housing estate at the northern edge of the City of London.

It is set over many levels, in the same brutalist concrete style as the rest of the Barbican. The main auditorium has a ticket desk and cloakroom on level -1 (Stalls), with Circle entrance above on level G. There are bars serving drinks, coffee and snacks on both levels. This space hosts the major events, generally classical concerts.

Another side of the main space has a theatre, with a large cinema screen downstairs on level -2. The two other cinema screens were closed in April 2010 and reopened in late 2012 in other parts of the complex. There are also galleries and exhibition halls, a library, and a very lovely and surprising garden area on level 3.

The food options at the Barbican were rejigged in September 2010; there's some information about this on their blog. The old Waterside Cafe on level 0 is now a "food hall" (see Debbie Does Dining review), while the Brasserie on level 1 is now the Barbican Lounge. The more upmarket option, Searcy's Bar/Restaurant, remains on level 2.

Ewan visited the Barbican Lounge in April 2011, and found it a pleasant (if pricy) place for a drink. You can sit outside on the balcony area (which is bedecked with shrubbery and canopies, and affords a lovely view over the lake at the centre of the Barbican Estate) until around 9pm. Inside, most of the rear is set up for dining, but there are some tables at the front for drinkers. Staff are friendly and attentive (perhaps overly so). There are no crisps or similar bar snacks, but they do a range of small dishes (for around £4 and upwards) which are quite nice.