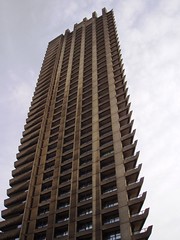 An imposing residential estate on the north-west edge of the City of London, which replaced an area damaged heavily during World War II. It was built largely during the 1960s and its brutalist concrete style has many admirers and detractors.

It is formed of several high-storey towers linked by low-rise blocks around a central area with a pond and gardens, as well as the old St Giles Cripplegate church photo. Access is via a series of highwalks around the complex. An arts centre (the Barbican Centre) opened within the complex in 1982.

The Estate is in the EC2 postal district, though EC1 borders to the north.

Auto-generated list of things in Barbican (view them on a map):