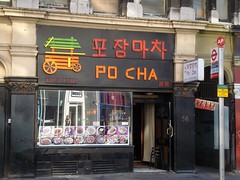 Po Cha was a Korean restaurant on St Giles Street, round the back of Centre Point. It closed in 2015 due to redevelopment of the site in connection with Crossrail. However, it later reopened in new premises on Lower Marsh.

Part of a row of three Korean restaurants round the back of Centre Point (the others being Woo Jung and Assa). At one point it was known as The Polo photo, which may have been a name left over from a previous incarnation of something in this building. However, it's now called Po Cha. The Korean name on the frontage is 포장마차 (Po Jang Ma Cha), which refers to a type of Korean street food stall, literally "covered wagon".

Po Cha offers a good range of Korean food, including cooked at the table BBQ. They do a bunch of different food, including the normal bibimbap and bulgogi as well as barbecue food, soups and a good range of side dishes. They also do big hot pot bowls that are enough for two or more to share. As of April 2008, prices range from about £2 for a bowl of kimchi up to £15 for a hot pot, with most things coming in at about £6. The portions are substantial, but for a good-sized meal you will probably need three portions to share. They also do a lunch set menu with four or five choices, each coming in at £5.50.

When Billy visited in April 2008, the food was good with three portions of barbecue, a plate of noodles, some kimchi, and a kimchi pancake happily filling up three hungry people. The pancake was especially a favourite of Billy's. Staff were friendly and polite and as the place is quite small were very attentive. They had metal chopsticks, which is nice if you like that kind of thing (and which is normal for Korean chopsticks).

They do Hite and OB beer as well as Soju and soft drinks.

They have a couple of barbecue tables and as such don't always have space to let you cook the food at your own table. They also have a bar that you can eat at.