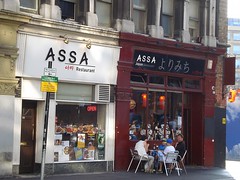 Assa was a Korean restaurant on St Giles Street, round the back of Centre Point. It closed in 2015 due to redevelopment of the site in connection with Crossrail. However, its other branch at 23 Romilly Street remained open.

claud visited in early 2007. Among other things we had the ground potato pancake and sweet and spicy chicken; both were very well done. Reasonably priced, about £10-12 per person including service charge.

As an additional bonus, a Korean supermarket (Centre Point Food Centre) is just across the road, where you can buy fish (shaped) icecream as a dessert afterwards.

Bob tried to visit on a Friday lunchtime at 1:15pm in February 2008, but there was no space.

A commenter known as "franzivar" tells us that they visited in January 2009 for the lunch menu, and had soup with dumpling and rice cake, a side dish of beansprouts, and another side dish of marinaded seaweed, all for £4.50. Franzivar's companions had rice with spicy stir fried pork, and chicken, which they found both tasty and filling.