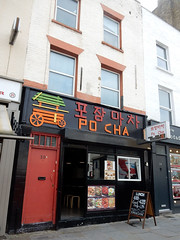 It was previously on St Giles High Street near Tottenham Court Road, but relocated to Lower Marsh in 2015. The Korean name on the frontage is 포장마차 (Po Jang Ma Cha), which refers to a type of Korean street food stall, literally "covered wagon".

Inside, it's quite small. Entry is into a small room dominated by a bar with half a dozen seats, and three more small tables tucked in around this. Walls, ceiling, and bar are all painted black, though some relief from blackness is given by the worn light beige tiles on the floor. Steps lead up to another small room at the back.

Kake visited on a Tuesday lunchtime in September 2015. There were about half a dozen other people in when I arrived a little before 1pm, but it filled up rapidly, and there were more like 15-20 customers by 1:15pm. Music was playing, fairly poppy but not too loud.

I decided to order from the lunch menu photo, which offers a choice of main dishes, a set side dish, and a bowl of miso soup for £5 (cash only).

The side dish and miso soup arrived almost immediately photo, with the former turning out to be a salad of seaweed and pickled vegetables, with a few shreds of seafood sticks intermingled. It had good texture but was a little too vinegary for my taste. The miso soup was fine.

My main course was vegetable bibimbab — a large bowl of rice topped with shredded lightly cooked vegetables and a fried egg photo, designed to be mixed up before eating photo. The vegetables comprised courgette, carrot, spinach, and daikon, and were cooked just enough to enhance their flavour while remaining crisp. The egg was very well-handled, with a crispy edge on the white and a runny yolk in the centre, and enhanced the rice notably once broken up and mixed in. The rice itself was good too, with just the right texture and no mushiness or starchiness.

Service was fast and efficient, though they did need reminding to bring my tap water. No service charge was added to the bill.

Kake's verdict: I'd certainly come back if I was in the area, though not if I wanted to linger over my food.

Accessibility: A large step to get in. The toilet (a single unisex cubicle) is down six steps, up another (no handrails in either case), and through a narrow gap. Three steps to the back room.