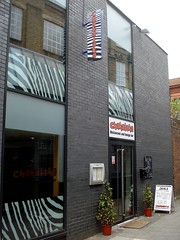 Chakalaka was a South African restaurant and bar in Chiswick. As of January 2011, it was closed up with a notice saying that bailiffs had taken possession of the premises, and their original branch in Putney has also since closed. The only remaining branch of Chakalaka is now in South Wimbledon, at 143-145 Haydon Road, SW19 1AN.

As of late 2011, the Chiswick premises are soon to be occupied by a branch of Chisou, a Japanese restaurant with branches in Mayfair and Knightsbridge.