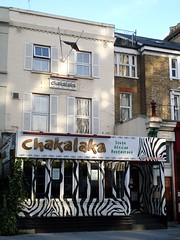 Chakalaka was a South African restaurant in Putney, with another branch in Chiswick. Both of these branches have now closed, and as of late 2011 the Putney premises are occupied by a pie-based restaurant called Putney Pies.

The only remaining branch of Chakalaka is now in South Wimbledon, at 143-145 Haydon Road, SW19 1AN.

South African restaurant in Putney, with another branch in Chiswick.

bob, Martin, and Phil visited on a Thursday night in December 2009. When we turned up at 8:30pm they were full, but they took our mobile number to call us when a table came free — since there was a pub next door this wasn't too bad, and the wait was only about 20 minutes.

We started with a combo platter of biltong, boerewors, and chicken wings (£13.50). The chicken wings were slightly disappointing, being not quite hot enough for bob's taste, but the boerewors and biltong were fine. For our mains we all had a 20oz T-bone steak (£20 including chips and green pepper sauce). This was good steak cooked rare as requested (much like at the Chiswick branch).

A bottle of Windhoek was £3.25. We also had a bottle of Spice Route Pinotage (£33) which was very tasty.

Accessibility: At least three steps up to get in, and there isn't really space to move around in a wheelchair inside.