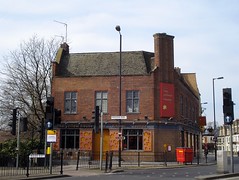 Opened in May 2008, the Yellow House Bar and Kitchen was originally an expansion of the original Yellow House restaurant on Plough Way; however, the latter closed at the end of 2008 and as of March 2010 is leased out temporarily to another concern. The Bar and Kitchen is located in former pub premises opposite Surrey Quays Station, and some of the fixtures and fittings remain from its previous life — one notable addition is a proper wood-fired pizza oven.

One of their specialties is brunch. Kake and friends visited a couple of times in 2008 to try this out. Eggs benedict (£6.50) included properly-poached eggs, with a shape clearly indicating that they were poached rather than steamed, and good ham. Scrambled eggs with smoked salmon (£7) were excellent (a word I don't use lightly), with plenty of golden egg colour and a loose, creamy texture, and were clearly served immediately after being cooked. The home-made muffin that they were served on was very good as well, with a flavour, texture, and freshness that you never get in the supermarket versions. On an August 2009 visit, Ewan's eggs florentine were wonderful, properly poached eggs with the kitchen's homemade bread photo; the mushrooms on toast were also well-received, though a poached egg perched rather awkwardly on the side with a tomato photo.

When we sampled the main menu options in May 2008, doop's lentil and herb burger photo (£9 including chips, salad, and avocado salsa) was quite comically mismatched in size with the (home-made) bun, but he seemed to enjoy it. Kake's smoked haddock fishcakes photo (£10.50 including chips and salad) were fine, though a little dry, and the accompanying mayonnaise was a little bland, despite having a colour that suggested it was home-made rather than Heinz. The chips that came with the fishcakes were actually thin fries, and were fine except their pre-salted nature meant that they only added to the saltiness of the fishcakes to make a rather thirst-inducing whole. People also seemed to enjoy their desserts; doop was very pleased with the apple and almond tart (£3.50): the tart itself was very good, but its crust was excellent.

On a Saturday evening visit in September 2008, Kake and bob were seated immediately despite not having booked. The place was rather busier and noisier than on previous visits, and this added to the prevalence of hard surfaces in the decor made it quite difficult to hear what was going on. This may have been why Kake's grilled tuna (£13) photo arrived cooked-through rather than rare as requested; however, our waiter realised quite swiftly that I was unhappy with it, and insisted on bringing me a replacement, which was cooked just right.

They are licensed; as well as a wine list they have Leffe and Aspalls (among other things) on tap. (A pint of Aspalls was £3.80 in February 2013.) It's fine to come in just for a drink rather than a full meal; if you're doing this, use the entrance facing onto Hawkstone Road (on the left in the photo on this page) rather than the Lower Road entrance.

Kake's verdict: This place is a very dependable local restaurant and I'd have no hesitation recommending it to someone who happened to be in the area, though with a warning about noisiness at peak times.

Accessibility: Step-free throughout, and there's a dedicated accessible toilet.

Getting here: It's located on the corner of Lower Road and Hawkstone Road, just across from Surrey Quays Station. It's only a few minutes' walk from Canada Water Station, or a nice stroll across [Southwark Park]? from Bermondsey Station.