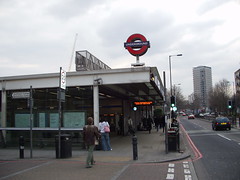 Tube station on the Jubilee Line, just on the Zone 2 side of the zone 1–2 divide.

There are two ATMs outside, a photo booth inside, and a small Post Office on the opposite corner (turn right on exit from station). Unlike most stations on the Jubilee Line, the benches on the platforms are actually fairly comfortable to sit on.

Accessibility: The ticket hall is accessed directly from the pavement with no steps, and there's a lift down to the platforms (head to the right after the ticket barriers and follow the walkway around). As of late 2008, the ticket barriers now have one of those extra-wide ticket-operated barrier gates, so you no longer need to wait for a staff member to open the accessible gate.