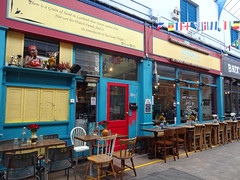 This crêperie and bar was originally set up by an arts organisation known as Brick Box, and named to match (see our original writeup). The Brazilian chefs were successful enough that they were able to buy the lease for themselves, and renamed the venue to Senzala.

An open kitchen fills half of the small space, with wines and beers displayed in a wooden gantry above and shelves behind. Wooden tables and chairs squeeze in to the other half to seat no more than 20-25 people, though seating for another dozen or so is available outside in the covered market arcade avenue. A feature wall at the back is painted a cheerful turquoise, and extra colour comes from the flowers in pots and vases on each table. Lantern-style lamps hang on long flexes from the ceiling.

The menu includes both savoury and sweet crêpes and galettes, with several vegan fillings available. All fillings can be had in either crêpes (made with plain wheat flour) or galettes (made with buckwheat flour). They also do salads, coffees, teas, juices and other soft drinks, and alcoholic drinks including cocktails.

On a March 2011 visit, itsbruce and companion started by sharing a picante galette (minced beef, red and green peppers, jalapeños and cheese at £4.80) photo, which they seasoned lightly with the café's home-made chilli sauce. The pancake itself was light and had a good texture, while the filling was moist and well flavoured; as a whole it hung together well and was not at all soggy. We were impressed enough with it to try a sweet pancake; a dark chocolate rum & passas crêpe (rum-soaked raisins and chocolate; £4.40) photo, which was delicious. The final bill, with two coffees, a tea and a fresh orange juice, was £17.40 (service not included).

On a January 2014 visit, itsbruce tried one of the new vegan galettes — the "Dujhan" photo — and a green salad. The galette contained garlic mushrooms, caramelized onions, asparagus, sundried tomatoes, rocket and spinach with maple and mustard dressing. It was very good and quite filling; I was not able to finish the salad, which is better shared between two unless you have a large appetite or are only having a basic crepe. With the addition of a cup of tea, the final bill was £12.60. Service was as prompt and friendly as ever.

When Kake visited in April 2016, there were three other customers in at 11:15am on a Friday morning, and music was playing, not too loud. Service was very friendly and helpful. Mint tea (£1.90) was fine; a generous handful of mint leaves brewed with boiling water in a glass mug. A takeaway rosa squash galette (vegan, and £8) suffered slightly from the takeaway process in that the galette itself got a little chewy after an extended journey, but the filling (butternut squash, courgettes, red pepper confit, tomato chutney, rocket, and toasted almonds) was great; nicely varied flavours and textures, and not as sweet as butternut squash-based things often can be.

itsbruce's verdict: this isn't quite as cheap as it used to be but is still a great place to eat.

Kake's verdict: I'd happily come back if I was in the area, and would likely choose from the vegan selection again as it all looked interesting.