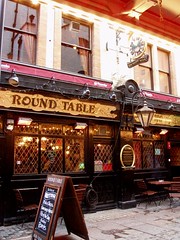 Pub hidden in an alleyway by Leicester Square Station.

Its location means that it's probably the least crowded pub in the area, though it can still end up being "standing room only". There's a room upstairs with additional seating, but on Monday, Tuesday, and Wednesday evenings this is reserved for comedy acts. There is some seating outside in the alley, too. There used to be some interesting decor on the ground floor photo 1, photo 2, but as of August 2011 this has all been papered over.

When Kake visited on a Wednesday afternoon in April 2008, there was almost nobody else there at 3pm, but people started arriving around 5pm and by 7pm the place was packed. It was a bit weird early on, since it's not really the kind of pub that feels right when it's empty, if that makes sense. Very quiet background music earlier in the day, which was either switched off or drowned out by conversation later on.

Accessibility: Ladies' loos are upstairs on the first floor and gents' are downstairs in the basement.