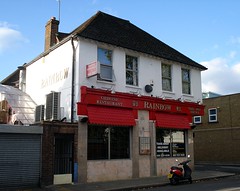 Chinese restaurant/takeaway a couple of doors down from Rotherhithe Station. They have an all-you-can-eat buffet priced at £7.50/adult, £4/child (higher prices on Fri-Sat: £9.80/adult, £5.50/child), and they also offer free takeaway delivery on orders over £10.

Kake and Bob tried their takeaway service on a Friday evening in July 2008. The food arrived in just over half an hour; it arrived hot, and reasonably competently packaged. Although we only spent £16 (and had ordered exclusively vegetarian dishes), we got a small bag of prawn crackers thrown in for free, and a single fortune cookie.

Vegetarian Thai crispy spring rolls (£2.60 for five) were quite bizarre, resembling nothing so much as samosas; a crispy triangle of pastry enclosing a filling of mashed potato studded with peas. The curry powder used in the vegetarian Singapore noodles (£3.50) had an unpleasantly bitter undercurrent. Vegetarian "fish" in black bean sauce (£3.60) was actually quite tasty, despite a few hard and chewy bits; it appeared to be thin slices of seitan in a flour batter, which worked quite well. Vegetarian "pork" in barbecue sauce (£3.60) was also made from seitan, but quite distinct from the "fish" - it wasn't very tasty though, and its sauce was rather watery. Monks vegetables (£2.60) were absolutely fine, with plenty of decent tofu included.

Kake's verdict: Nothing special; though it's pretty cheap, and it's a reasonable choice if you live in the area and feel like having someone bring you fake meat. The only dishes I'd order again were the monks vegetables and the vegetarian "fish". It's probably better than the one on Jamaica Road closer to Bermondsey Station, but I'd have to try the meat dishes to be sure.