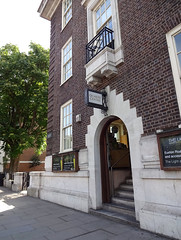 It's located in Friends House, the Quaker meeting house, but is fully open to the public. There's also a restaurant elsewhere in the building. The cafe/bookshop has a direct entrance on Euston Road but can also be reached via the main entrance in the garden (do a right U-turn just inside the door, or ask the person manning the information desk).

There's not much natural light inside, but this is sensitively addressed with near-white walls and natural-spectrum lighting from a combination of strip uplighters and spotlights. The carpet is hard-wearing, but coordinated with the rest of the furnishings in dark brown and green. Seating is a combination of comfortably-padded upright chairs and freestanding banquettes. Additional seating is available in a courtyard garden.

It's semi-self-service, with sandwiches in an open fridge unit, and rolls and scones in baskets with tongs; but hot food and drinks, as well as slices of cake and quiche, are ordered at the till. The hot food menu is short but changes daily photo of example from November 2015, and there always seems to be a vegan option available. The snacks also include vegan options (in November 2015 they had power balls and Primal Strips vegan jerky). They have soya milk as well as cow's milk for hot drinks, at no extra charge.

Kake has visited several times now. On a Friday morning in November 2015 there were a fair few people in when I arrived around 11am, but still several free tables. On a Tuesday morning in October 2017, it was quite busy, but luckily a table became free just as my food was ready. No music was playing on any of my visits. Some times it's been fairly quiet, other times there's been a good buzz of conversation.

When [Susz]? visited in November 2007, the people were very friendly, and a big mug of tea was only 80p. They had a large selection of FairTrade teas and snacks all for reasonable prices.

In November 2015, Kake's scone photo was huge and a bit odd-looking, but the flavour and texture were fine. A cheese and sundried tomato croissant (£3) in October 2017 was pretty good, served hot and filled with a generous quantity of cheese and two large sundried tomatoes. Hummus and roasted vegetable sandwich (£2.50 in May 2019) had slight staling on one of the slices of bread, but only very slight, and the veg inside were very good.

Kake's favourite lunch here so far has been the vegetable frittata (£5.75 in August 2019 including potatoes and salad) photo. It was served just warm enough to bring out the flavours and ensure a nicely wobbly texture in the soft, smooth set custard. The new potatoes were also good, boiled in their skins in salted water for a perfect level of seasoning. Help-yourself salads from a selection of five were fresh and well-executed; my choices included a tomato salad spiked with excellent gherkins.

Kake's verdict: I use this a fair bit now, since it's cheaper than the cafes in the Wellcome Collection and British Library, and directly on the route between the two.

[Susz]?'s verdict: Somewhat quieter and more civilised than the coffee places in the station.

Child-friendliness: There's a children's corner with toys and books, and they have at least three highchairs with built-in trays. There are baby change facilities in the accessible toilet.

Accessibility: The Euston Road entrance has several steps (with a sturdy handrail most but not all of the way up), but the main entrance via the garden has a (somewhat steep) ramp. No steps to the toilets, and there's an accessible one with baby change facilities.