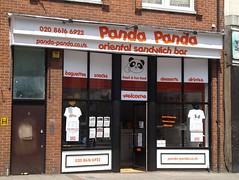 Vietnamese cafe on Deptford Broadway at the New Cross end of Deptford. Note that as of January 2015 they only accept cash.

Inside, there are five tables, round and wooden-topped with tubular metal frames, and four matching chairs at each. The floor is covered with large light tan tiles, the walls are painted white, and large windows at the front let in the sunlight.

Sarah visited on a Tuesday lunchtime in May 2010 for a banh-mi (French/Vietnamese baguette). Previous banh-mi experiences have varied — the now closed Viet Baguette had nice fillings but dull bread, and a recent banh-mi at Chung Viet was tiny and lacked veg. Happily, this was a decent size, the bread was fantastic, and the vegetables were lovely and fresh. The bread was light on the inside and crisp on the outside. I believe traditional Vietnamese baguettes are half wheat flour and half rice flour which may explain it... I went for the "rolled pork with Viet ham", which had plenty of vegetables inside (carrot, cucumber, chilli, and peanuts — the latter two optional). It was made fresh in about a minute or two and served still warm. The cafe itself was nice and clean, and the staff were friendly.

Kake visited a month later and tried the Vietnamese ham & paté banh mi (£3.45) photo. I was similarly impressed with the bread (though note that the crisp outside does go soft quite quickly, so if you're having takeaway then be prepared for this) and the generous size for the price. The paté was significantly smoother than the version at Chung Viet around the corner. There was something a little odd about the flavour of the pickled vegetables, not entirely to my taste. The Vietnamese ham (a sort of sliced boiled pork sausage) was fine, though, and the slices of fresh red chillies, while fairly sparse, were pleasingly hot.

Kake also tried the prawn summer rolls (£3 for three) in June 2010 and thought they were fine, even though pre-made — the wrappers hadn't dried out, the prawns were sweet-tasting and well-seasoned, and there was a decent quantity of herbs. I marginally preferred the summer roll wrappers at Chung Viet, but I preferred the balance of the filling here.

In January 2014, Kake tried the "banh mi Vietnam" (£3.75), which included fresh pork as well as pate and Vietnamese ham, along with the usual pickled vegetables. The bread wasn't quite as good as my 2010 experience, being more of a standard baguette, but the pickled vegetables were fine this time, and the fresh pork was great — nice thick slices, with plenty of fat as well as meat, and a pleasantly chewy rind.

In addition to the baguettes, they also have cartons of summer rolls ready made to take away as well as all sorts of drinks, fresh fruit juices, a range of bubble tea, Vietnamese coffee, etc. Hot food includes noodles, curry fish balls on a stick, and beef noodle soup. There's also a couple of Hong Kong style desserts, plus milkshakes blended with all kinds of chocolate, a bit like Shakeaway.

As of January 2015 they have two vegetarian banh mi options on the menu, one based on peppers and mushrooms and the other based on tofu; both use (optional) hummous as a substitute for the pate in the meat versions. There are two vegetarian noodle options, vegetarian summer rolls, and non-dairy smoothies.

A sign seen in June 2010 offered free wifi as long as you spend over £3 (we suspect you need to ask for the passkey at the counter).

Sarah's verdict: I'd definitely go back, I'd like to try Vietnamese coffee, and see how their bubble tea compares to my usual bubble tea from Cafe de Hong Kong.

Kake's verdict: I've been back here a few times now, but I still have to try banh mi and summer rolls from the other places along Deptford High Street — Panda Panda isn't yet a clear winner for me.

Accessibility: No steps to get in, just a sort of very shallow ramp up, hidden under the welcome mat. Not sure if there are any toilets.