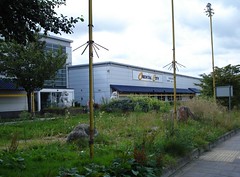 Oriental City was a large South-East Asian mall and community centre in North London, reasonably close to Colindale Station. It closed for redevelopment on 1 June 2008, though for some years no progress was made towards this redevelopment, and former tenants held a protest in February 2010 over the continued closure of the site.

In March 2012, dimsum.co.uk reported that Development Securities, the owners of the site, had made an agreement with the Morrisons supermarket chain, which would hopefully include regeneration of the site and the return of Asian businesses.

Finally, in July 2017, Bang Bang Oriental Foodhall opened in a newly-constructed building on the site, next to a giant Morrisons.

While all this was in progress, another similar site, Pacific Plaza, opened up in Wembley around the end of 2009, but closed in Spring 2011.

Below is a partial list of where the Oriental City traders have moved to; please let us know if you know of any others. See also our list of places we've reviewed that used to be in Oriental City before it closed.

Moved before the closure:

The info below is retained for people who want to know what Oriental City used to be like.

The (covered) food court on the ground floor is a proper food court, with stalls arranged around the edges, and chairs and tables in the middle. You can have Japanese, Chinese, Thai, Malaysian, Indian, you name it. Select your favourite dishes from as many stalls as you like, and collect them when your number comes up.

Specific recommendations: there are two dim sum places, and the one that's called "Dim Sum House" has a better selection than the other, the "Royal Lido". (Although their "Shanghai style" pork dumplings are not in fact soup dumplings; my quest continues. --Kake)

Colindale Station is closest; Burnt Oak Station is also within walking distance, but as it's one stop further out than Colindale it's probably less useful. If you're driving, it's worth knowing that they have a free car park.

Comment added by chewie: I do really miss Oriental City. Any chance of them opening the food court section? Wishful thinking. I do miss Malaysian food. My friend recently informed me that there is a new Malaysian restaurant called Malay Chinese Restaurant in Borehamwood, Hertfordshire.

Comment added by Silent Hunter: Worth mentioning that this site was a key filming location for a BBC/RSC TV production of 'Julius Caesar' aired in 2012.