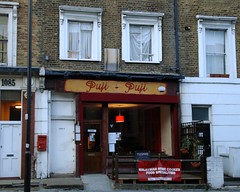 Puji Puji was a small Malaysian restaurant on the Balls Pond Road to the north of De Beauvoir Town. It has now closed. As of early 2014 the premises are occupied by a noodle bar called Salvation In Noodles.

Small Malaysian restaurant on the Balls Pond Road to the north of De Beauvoir Town (though much of the interweb seems to think it's in Islington). Opened in mid 2008, it's run by the people who used to have the Malaysian food stall at Oriental City.

The single room of the restaurant is dominated by a dedicated satay bar, with high stools for people who want to sit there and see their food cooking. The rest of the room is filled with small tables, seating maybe 20-30 people.

Kake started with lamb satay, on the recommendation of Dos Hermanos (linked below), but was slightly disappointed; the marinade was basically just too sweet for my taste (proper satay may be meant to be like this — I don't know), and I found some of the meat a little chewier than I really wanted. I should probably have had the chicken, and if I come back, I will. Roti canai, though, were good — warm, rich, and soft — and the dal that came with them was excellent. Ewan also enjoyed his samosa-like Bungkusan ayam dan sayuran campur starters, spicy and tasty photo.

Kake's main of fish and okra curry in a tamarind sauce was also a little disappointing. Although the fish was fine, and there was a nice hint of chilli heat in the sauce, the okra were almost inedibly stringy and tough. Ewan, however, was very happy with his vegetarian mee goreng, a very fine rendition of this traditional noodle-based dish.

Our final bill, impeccably hand-written, for just about the right amount of food came to just under £16/head excluding service (refreshingly, no service charge was added to the bill; we added some ourselves, of course).

They're not licensed, but you can BYOB — there's a Costcutter just across Southgate Road with a reasonable if slightly randomly arranged selection of wine. We weren't charged corkage, but then we did have to open the bottle ourselves. A jug of tap water was placed on our table as we sat down, no need to ask.

Accessibility: There's a (fairly steep-looking) ramp up to the front door, and there's an accessible toilet, but there's really not much room inside the restaurant and Kake isn't sure you'd be able to squeeze a wheelchair past the bar in order to actually get to the toilet.