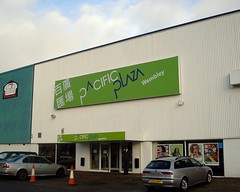 Pacific Plaza was a reasonably-sized East and South-East Asian shopping mall and food court in Wembley very near Wembley Stadium. It was very similar to (and touted as the replacement for) the now-closed Oriental City, but has now closed in its turn.

As of April 2011, Mitsu reports that her husband was turned away at the door by a security guard. The Pacific Plaza website described this as a "temporary closure", but signs of its reopening are not promising, and indeed as of September 2011 the website itself has vanished.

Tetote Factory, the Japanese bakery that used to be on the ground floor, reopened in South Ealing in Autumn 2011, at 12 South Ealing Road, W5 4QA. Doki, the tableware shop (previously Utsuwa-No-Yakata in Oriental City) also reopened in Harrow Weald a month or so later, at 207 High Road, HA3 5EE.

The information below is retained for people who want to know what Pacific Plaza used to be like.

Reasonably-sized East and South-East Asian shopping mall and food court in Wembley very near Wembley Stadium. It's very similar to (and is touted as the replacement for) the now-closed Oriental City, and the project is in fact the brainchild of a former Oriental City tenant.

The first tenants moved in just before the end of 2009, and by mid-February 2010 the opening had progressed far enough for the centre to host a Chinese New Year celebration. In addition to the businesses mentioned below, there were plans for a supermarket, a bookshop, a clothes shop, and a martial arts hall offering classes and demonstrations, though as of October 2010 very little progress is apparent on any of these. The supermarket has been fitted out since January 2010 photo, but since the opening has been announced and then put off a number of times already, it remains to be seen whether this will actually happen — as of early October 2010 it still isn't open, though some progress does seem to have occurred in that a rank of shopping trollies has arrived photo.

As of early September 2010, there are four or five businesses trading on the ground floor:

(There was also a tat shop photo, but this closed in September 2010.)

The food court is upstairs, on the first floor. As of October 2010, there's a very small amusement arcade in one of the food court units, with four game machines photo.

As of October 2010, seven or eight of the thirteen units in the food court are open for business:

According to an anonymous commenter on this page, some of the food stalls offer discounts to employees of the London Borough of Brent, on production of a valid ID badge. We haven't verified this, and we don't know which stalls offer the discounts.

China House: Kake first tried the dim sum in January 2010. King prawn cheung fun (£3.80) photo was OK, though the wrappers were a little thick and the prawns a decent size but unremarkable in quality (and perhaps very slightly overcooked). Pan-fried turnip cake (£2.60) photo was good, with decent, not-dried-out chunks of roast meat, obvious shreds of turnip, and a decent amount of browning on the outside. Siu mai (£2.50) photo were pretty good too, with large chunks of prawn to complement the pork, and a well-judged fat-to-meat ratio. Jasmine tea (80p) came in a 300ml polystyrene cup with the teabag still in (a commenter, dapprman, tells us that you get an actual teapot if there's more than one of you).

Kake, Sarah, and Katie tried more of the dim sum in October 2010. The fried dough cheung fun photo was pretty good, with the doughsticks freshly fried and crisp. It came with the sweetened soy sauce on the side, to stop the doughsticks going soggy, and was accompanied with sesame sauce and hoisin sauce.

NP Star Snack Bar: Kake and Sarah had the takoyaki (deep-fried octopus croquettes) in October 2010 — they were good, with nice creamy insides and plenty of octopus.

Shan: In June 2010, Kake tried the salmon sashimi bento box (£9.50) photo. This included one gyoza dumpling, one skewer of teriyaki chicken, a large handful of edamame, a generous helping of salmon sashimi, a leaf and cherry tomato salad, rice, and miso soup. The gyoza was freshly fried, with a nice crust on the bottom. The chicken was very tender, and its sauce nicely balanced and not too sweet. The edamame were served at room temperature, so not freshly cooked, but this was done competently and the texture didn't suffer too much. The salmon sashimi was fairly thinly sliced, and some of the pieces were a little irregular, but it seemed fresh enough. The salad was properly dressed with a well-balanced dressing. The rice was fine, neither undercooked nor mushy, and nicely presented with a sprinkling of black sesame seeds, and the miso soup had a pleasant if not particularly complex flavour.

Initially the food court also had another Thai place called Sawadee Thai (see photo of som tam with more info in the comments), but this only lasted a few months and as of October 2010 the unit where it used to be is empty and clear of all signage.

Accessibility: Step-free to get in. There's a large car park just outside (a commenter, dapprman, tells us that when they visited on a football playoff day in June 2010 there were security guards making sure that only non-football cars were allowed into the carpark). There are steps up to the food court on the first floor, but there's also a lift (go around the right-hand side of the stairs and you should see it). Toilets are on the first floor too, including a dedicated accessible toilet.

Getting here: It's about 5 minutes' walk from Wembley Park Station on the Jubilee Line. Come out of the exit signposted for Wembley Stadium, and at the bottom of the steps carry on through the underpass directly towards the stadium. Continue over one road and then turn left onto Engineer Way just under the ramps leading up to the stadium. Wembley Retail Park is a little way along on the left. Alternatively, buses 92 and P92 stop directly outside.
Last visited by Kake, Sarah, and Katie, October 2010.
Last edited 2012-05-28 09:29:22 (version 35; diff). List all versions.